First-generation student Ember Suh, a senior chemistry major at the University of Mississippi, has been named a 2022 mentee for Toxicology Mentoring Skills Development and Training, a program that bolsters underrepresented populations in science, technology, engineering and mathematics fields. The program will allow the Southaven native to discover different applications of toxicology – the study of diagnosing and treating exposure to toxins – and find the niche she is most passionate about, Suh said. A member of the Sally McDonnell Barksdale Honor College majoring in forensic chemistry, Suh said she hopes to use the skills she picks up to help make a real-world impact on communities around her. 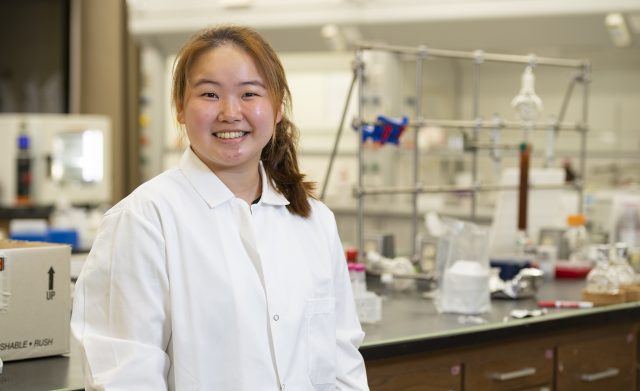 Ember Suh, a senior forensic chemistry major, has been named a 2022 mentee for the Toxicology Mentoring Skills Development and Training program. The Southaven native hopes to use the skills she picks up to make a real-world impact on communities around her and to encourage other minorities to consider STEM career fields. Photo by Thomas Graning/Ole Miss Digital Imaging Services

“I actually was interested in lead being found in drinking water and other chemicals in water supplies in the past,” Suh said. “I became interested in that because I wanted to do something about the Jackson and Flint water crises.”

Suh took a toxicology class in 2021 under Kristine Willett, professor of pharmacology and environmental toxicology and chair of the Department of Biomolecular Sciences, in 2021. It was Willett who encouraged Suh to apply for the mentorship program.

“She stuck out among her classmates because she got a 100% on everything – nobody gets a 100 on everything,” Willett said.

As a part of the program, Suh will attend a workshop at the University of California at Davis, meet monthly with her mentor and, if successful, be awarded a certificate of completion at Tuskegee University.

Each participant in the 2022 class of 25 mentees is assigned a mentor in their field of study. Suh will shadow Mike Peterson in his role as a principal at Gradient, an environmental and risk sciences consulting firm.

Having an assigned mentor helps to bridge cultural gaps in education while alleviating some of the burden on underrepresented groups, Willett said.

“If you’re a first-generation or underrepresented student, you may not know all of the options,” Willett said. “If you happen to have one good mentor, they can do that for you. But that’s more of a luck, positional and potentially privileged thing.

“This will build community and help participants see the diversity of career pathways and options.”

Funded by the National Institutes of Health, the Toxicology MSDT program provides career development opportunities for students of underserved backgrounds in the field, where there is a “critical lack” of diversity, the program’s description cites.

Eden Tanner, an Ole Miss assistant professor of chemistry and biochemistry, said she has noted a lack of diversity in STEM fields, and that the lack of different voices in research can have real-world effects, particularly on underserved populations.

“Diverse teams are more creative, better at their jobs, and they’re better at science,” Tanner said. “A lot of what we do stems from that diversity. A lot of the great ideas that our teams have happened because team members bring different life experiences to the table.

“… The critical lack of diversity in many fields, including toxicology, has hugely deleterious effects on people, and it goes some way to explaining health disparities.”

Suh’s parents emigrated from South Korea in the 1990s. Growing up as a second-generation American and first-generation student, Suh said her South Korean background has influenced how she communicates with professors and peers.

“I’m still having problems talking with mentors and professors,” she said. “I think it’s a part of South Korean culture. If there’s someone older than us or in a higher position than us, we’re supposed to respect them.

“I think because of that mindset, I’ve been nervous talking to people older than me and in a higher position than me, especially professors. I think I’m still trying to find a way to relate to them and talk comfortably with them.”

This problem is rampant among many underserved populations, Tanner said. Not having generational knowledge about higher education – how to apply for scholarships and graduate schools, different fields of study available, even not knowing about office hours – means some students never take advantage of university resources.

Finding a good mentor, someone who can open doors for students and nurture their passions, is at best a matter of luck, and at worst a matter of privilege, Tanner said. Programs such as Toxicology MSDT take luck out of the equation by partnering students with mentors directly.

As a toxicologist, Suh hopes to continue advocating for minority and underprivileged populations.

During her graduate research, Suh said she wants to analyze airborne pollutants in the Memphis area. This interest arose after she heard of a recent finding of an EPA-classified carcinogen in the air there, she said.

“They may not know all of the resources they might have,” Suh said. “Having someone they can look to is one of the reasons I wanted to go into toxicology.”