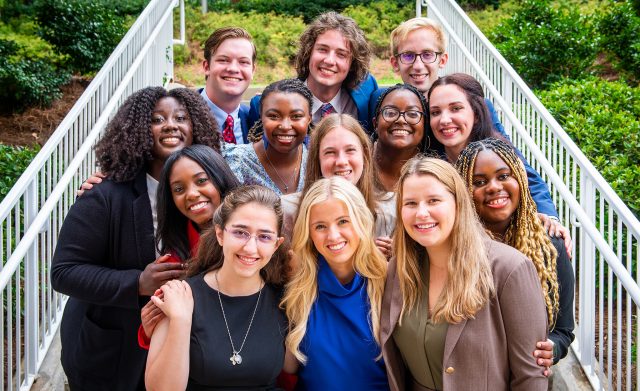 The Stamps Scholars Program awards scholarships based on academic excellence, leadership experience and exceptional character. The program awarded 247 scholarships this year to students at 31 partner institutions across the U.S. and the United Kingdom.  Jasmine Sanders, a biochemistry major from Prosper, Texas, is one of the 13 new scholars.

The new class brings the number of Stamps Scholars at Ole Miss to 58, making the university the second-largest in the program.

At UM, each scholarship covers the full cost of attendance, along with a $12,000 stipend for enrichment activities such as study abroad, academic conferences and leadership training.

The complete roster of freshmen UM Stamps Scholars is:

Ashleen Williams, a fellow in the Sally McDonnell Barksdale Honors College, serves as an academic mentor for the scholars. She said that this year’s class is poised to do great things.

“I hope that they will learn to ask big questions and seek answers to them, and to extend their ideas of what is possible,” Williams said.

Georgia native Roe Stamps and his late wife, Penny, launched the Stamps Scholarship in 2006. Though Penny Stamps died in 2018, her legacy continues through the Stamps Scholars community, which has grown into an international network of more than 2,600 scholars and alumni.

“The Stamps family and organization are true partners in helping identify students that want to think creatively and solve big problems,” said Katie Morrison, director of foundation relations and strategic partnerships at UM. “What we have been able to grow together – a supportive scholar community that enriches our whole campus culture – is a testament to what higher education should deliver.

“We appreciate their investment that has made the Ole Miss program the second-largest Stamps Scholars collective. Our students live out their dreams because of Roe and Penny Stamps’ vision and generosity.”

For more about this class of Stamps Scholars, visit https://www.stampsscholars.org/. To learn more about supporting scholarship programs at UM, contact Morrison at katie@olemiss.edu.