Recognition for Advancing Inclusiveness and Diversity

Departmental Diversity Mission Statement: The Department of Chemistry and Biochemistry at the University of Mississippi embraces the rewards of a diverse and inclusive academic community.

Prof. Charles Hussey Received the Lift Every Voice Award in 2018 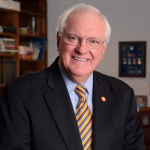 Prof. Charles Hussey received the Lift Every Voice Award in 2018, which recognizes those who actively contribute to the betterment of relationships at the University of Mississippi.   The Black Faculty and Staff Organization of the University of Mississippi founded the ‘Lift Every Voice’ award to recognize an individual, group or entity that has contributed to the betterment of human relationships on our campus.  Particular emphasis is given to the areas of diversity, multiculturalism and inclusion. Recipients of this award have worked beyond their normal employment boundaries and performed the ‘extra mile’ of service to their fellow man for the university.   Donald Cole, assistant provost and an associate professor of mathematics, presented the award to Hussey at the opening ceremony of the University’s Black History Month Celebrations in Fulton Chapel on February 1st, 2018. Dr. Hussey served as Chair of the Department of Chemistry and Biochemistry from 1997 until 2017 and then became the first  Associate Dean for Research and Graduate Education in the College of Liberal Arts.   At the University of Mississippi, he has been honored with the Distinguished Research and Creative Achievement Award, the Faculty Achievement Award, and the 25-Year Service Award.

Prof. Murrell Godfrey Received the Diversity Award for Excellence from the Mississippi IHL in 2016 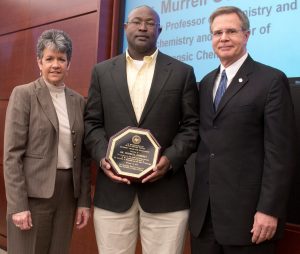 Department of Chemistry and Biochemistry Received the Stanley C. Israel Regional Award for Advancing Diversity in the Chemical Sciences for the Southeastern Region of the American Chemical Society (ACS), for the year 2015 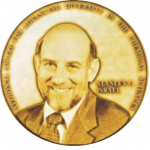 The Stanley C. Israel Regional Award recognizes individuals and/or institutions who have advanced diversity in the chemical sciences and significantly stimulated or fostered activities that promote inclusiveness within the region. 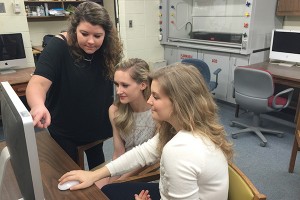 The University of Mississippi Department of Chemistry and Biochemistry received the Stanley C. Israel Regional Award for Advancing Diversity in the Chemical Sciences for the Southeastern Region of the American Chemical Society (ACS), for the year 2015. The Department was nominated for the award by the Ole Miss local section of the ACS.  There were a number of accolades highlighted in the nomination package, which were the direct result of the department’s longstanding efforts to increase participation of women and underrepresented minorities in chemistry. Of particular note was the recent hiring of the Department’s first African-American woman as an Assistant Professor in 2014, and the hiring of recent African-American graduates, Dr. Margo Montgomery-Richardson and Dr. Shana Stoddard, as Assistant Professors at Alcorn State University and Rhodes College, respectively. Additionally, a former summer program participant, Sharifa T. Love-Rutledge (Tougaloo College Undergraduate) made history by becoming the first African-American woman to graduate from the Department of Chemistry at The University of Alabama in Tuscaloosa. Overall, five African-American and one Hispanic Ph.D. students, three of whom are women, earned their chemistry doctorates from the Department of Chemistry and Biochemistry over a one year period during 2012-2013.  UM BS Chemistry majors (from left) Ashley Williams, Sarah Sutton and Katelyn Allen conduct undergraduate research. Other notable achievements include a graduate population that maintained a 30-50% female and a 10-15% minority rate over the previous five years, and a B.S. Forensic Chemistry program where 76% of the majors are women.  The Department had vigorously adopted a number of new strategies to recruit underrepresented students into the chemistry program. There was a new awards celebration, which, in 2015 alone, recognized 32 female undergraduate chemistry students. The Department implemented a “welcome to school” picnic for undergraduate chemistry students, which also has increased the number of women and minority chemistry majors. Further, the Department modified its ACS accredited B.S. in Chemistry degree to have an optional Biochemistry emphasis to attract pre-med students, which resulted in women becoming nearly half of those majors. 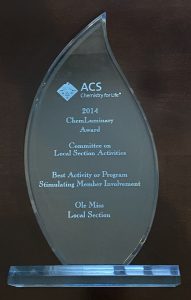 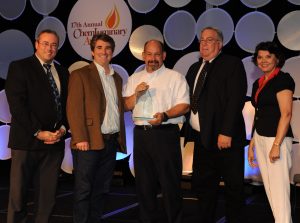 The Ole Miss local section of the American Chemical Society (ACS) received the Best Activity or Program Stimulating Member Involvement from the Committee on Local Section Activities (LSAC) of the ACS for its 2014 activities.  This award honors a local section annually that offered a new or improved activity or program that stimulated member involvement.  The Ole Miss local section of the ACS is located in north Mississippi and encompasses 21 counties and most of its membership is concentrated at the University of Mississippi. The chapter’s goals center around meaningful social and professional relationships between chemistry related professionals including high school and college students, teachers at all levels in the chemical sciences, and professional chemists.  In 2014 the local section spearheaded a year long series of social activities aimed at increasing local section membership and participation, especially from students.  This program, termed the ACS Book Club, purchased a number of nonfiction titles for the participants to read as part of a common reading experience.  After a short time, the participants met and discussed the concepts and merits of the titles.  The books included “Warmth Disperses, and Time Passes” by Hans Christian von Baeyer, “The Alchemy of Air” by Thomas Hagar, and “The Poisoner’s Handbook: Murder and the Birth of Forensic Medicine in Jazz Age New York” by Deborah Blum.

Department and Prof. Eftink Received the Excellence in Promoting Inclusiveness in Graduate Education Award for 2012 and 2013 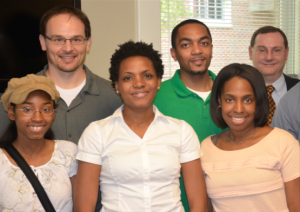 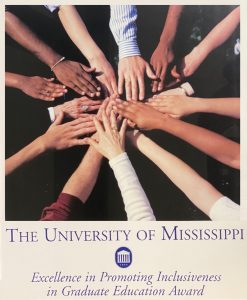 Established in 2004, the Excellence in Promoting Inclusiveness in Graduate Education Award is given annually to an individual (faculty member, staff member or student), a group of individuals or an academic program who/that exemplifies a commitment to the cause of enhancing diversity at the graduate level. The purpose of this award is to highlight best practices and to honor those who are responsible for creating or enhancing an inclusive environment for graduate education at the University of Mississippi.  The Department of Chemistry and Biochemistry received the award for their efforts in 2012 at promoting inclusiveness for graduate students within the department.  In 2012-2013, the Department of Chemistry & Biochemistry graduated 5 African-American students with their Ph.D.s in the STEM field of chemistry, representing approximately 5-10% of the national total of African-American students receiving this graduate degree over this time period.  Three of these students are women.   Prof. Maurice Eftink also received this award in 2013 for his personal efforts at the University.

Prof. Maurice Eftink was Awarded the Council of Graduate Schools/Petersons Award for Excellence in Promoting Inclusiveness in Graduate Education in 2003, the Lift Every Voice Award, and held an NSF AGEM (AGEP) grant between 1999-2012 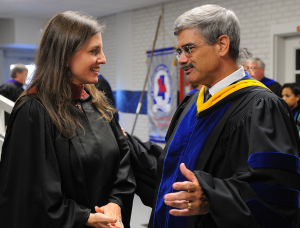 Maurice Eftink became Associate Provost and Dean of UM’s Graduate School in 1998. Previously, Eftink was a Professor of Chemistry and Biochemistry, having joined the Department in 1978 after obtaining his PhD from the University of Missouri in 1976 doing a post-doc at the University of Virginia. During his faculty career he published over 100 research articles and book chapters, received over $2 million in federal research funding, and received the Faculty Achievement Award, one of the highest recognitions given by the University. After becoming Graduate Dean, Eftink obtained over $8.5 million in external funding to support graduate education initiatives. One of these projects was the National Science Foundation funded Alliance for Graduate Education in Mississippi (AGEM), which is a state-wide consortium of universities for the purpose of enhancing the success of minority students in obtaining doctoral degrees in science, mathematics, and engineering. In December 2003, Eftink and the Graduate Student Council were awarded the Council of Graduate School’s/Petersons Award for Excellence in Promoting Inclusiveness in Graduate Education.  Prof. Eftink also received the Lift Every Voice Award from the Black Faculty and Staff Organization of the University of Mississippi.