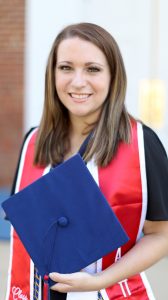 A 2020 graduate of the Department of Chemistry and Biochemistry and the Sally McDonnell Barksdale Honors College at the University of Mississippi has been awarded a prestigious scholarship from the National Collegiate Honors Council.

Genevieve Verville, a May 2020 B.S. Chemistry graduate with minors in mathematics, biological sciences and psychology, has been named a 2020 NCHC Portz Scholar. The Montgomery, Alabama, native is one of four recipients nationwide and will present her honors thesis during the NCHC virtual conference, set for Nov. 4-8.

“I was thrilled to learn that other people outside of the University of Mississippi are interested in my research and I am excited to learn about the other Portz scholars’ research,” Verville said. “The general public would be interested in my research because the phenomenon known as the hydrophobic effect has many implications in developing new treatments for disease and in drug design and effectiveness.”

“We nominated Genevieve’s thesis over those of her 343 peers in the Sally McDonnell Barksdale Honors College given its depth and breadth,” he said. “The National Collegiate Honors Council chose three top theses, including Genevieve’s, over all the nominations submitted by the nation’s honors colleges and programs.

“Once again, our SMBHC scholars distinguish themselves not only on campus but in the nation with their scholastic commitment and pursuit of knowledge and understanding.”

The focus of Verville’s thesis was three organic molecules – called osmolytes – that are important to proteins. These molecules are trimethylamine N-oxide, known as TMAO; guanidinium; and urea.

Osmolytes play crucial roles in protecting cells against environmental stressors that can negatively affect them.

“The exact mechanisms by which TMAO stabilizes and both guanidinium and urea destabilize folded proteins and interact with each is still a mystery,” Verville said. “We used a technique called Raman spectroscopy to explore the interactions between the molecules of interest in water to better understand how they interact with each other and affect the adjacent networks of water.”

Beginning this fall, Verville plans to spend the next two years working as a post-baccalaureate research fellow at the National Institutes of Health in Bethesda, Maryland. Following completion of her fellowship, she hopes to apply to doctoral programs to continue her education and research.

“Genevieve is one of the finest honors students I have known in my 13-year tenure at Ole Miss,” said Hammer, who first met Verville when she enrolled in his lab as a freshman. “She first appeared as second author on a published paper that was featured on a journal cover in the Journal of Physical Chemistry B.”

Verville’s co-authorship on that first publication with Hammer stemmed from her taking over a project that involved studying TMAO’s interactions with urea and her making critical contributions that ensured its completion and success, Hammer said.

“At an early age, she (Verville) was operating on the level of a graduate student,” he said.

Verville’s thesis research is the basis of an upcoming article in the Journal of Raman Spectrometry on which she is first author. Hammer noted in his nomination letter for the Portz that “She developed her research plan on her own and I had complete confidence that she would succeed in seeing it through to a successful end.”

Verville said she thinks her thesis, titled “Raman Spectroscopic and Quantum Chemical Investigation of the Effects of Tri-Methylamine N-Oxide (TMAO) on Hydrated Urea, Hydrated Guanidinium, and Hydrogen Bonded Networks,” will be of interest to the other researchers because the nature of the interactions between the osmolytes continue to be debated.

The 55th annual NCHC conference was scheduled to be held in Dallas but was switched to a virtual format because of the COVID-19 pandemic.

This is the second year in a row that a graduate from the Department of Chemistry and Biochemistry has won this national award.  Kennedy Dickson, a 2019 Forensic Chemistry graduate, won the 2019 contest.