Six University of Mississippi chemistry majors have recently been welcomed into one of the oldest and most prestigious honor societies in the world.

The Phi Kapa Phi honor society’s mission is “to recognize and promote academic excellence in all fields of higher education and to engage the community of scholars in service to others.”

On a campus of about 19,000 students, it can be hard to stand out, but the newest members of the University of Mississippi chapter of the Phi Kappa Phi (PKP) national honor society are certainly able to do it.

“Phi Kappa Phi is the nation’s oldest and most selective honor society for all academic disciplines,” UM PKP President Jeremy Loenneke said. “Membership into Phi Kappa Phi is by invitation only and is open to those who have a consistent record of academic excellence.”

Approximately 560 students were invited to join the chapter for the fall of 2021. The chapter hosted its initiation ceremony in the Ford Center, Sunday, October 10, with Dr. Dave Puleo, dean of the UM engineering school, delivering the keynote address.

The UM chapter of Phi Kappa Phi has been a part of campus for more than 60 years, which Loenneke said speaks to the caliber of students and faculty at the university.

“The overall environment is also one that promotes and values academic excellence. All of this together fits right in with the mission and motto of Phi Kappa Phi, which is to ‘let the love of learning rule humanity,’” Loenneke said.

Phi Kappa Phi membership also comes with recognition on your college transcript and a chance to apply for a number of prestigious local and national scholarships. This fall’s new class of initiates includes student representatives from every school and college on the UM campus.

Loenneke said there are hundreds of UM students who should be feeling particularly proud of their accomplishments right now.

“To be selected for initiation is a great honor and means that you represent the very best of your class.”

Phi Kappa Phi has a long and impressive history. In 1897 at the University of Maine, 10 senior students, two faculty members and the school president created an honor society that was different from the few others then in existence- one that recognized and honored excellence in all academic disciplines. Under the leadership of undergraduate student Marcus L. Urann, the group formed the Lambda Sigma Eta Society, which was later renamed Phi Kappa Phi from the initial letters of the Greek words forming its adopted motto: Philosophìa Krateìto Photôn, “Let the love of learning rule humanity.”

Please join the department in welcoming these 2021-2022 chemistry majors to the Phi Kappa Phi Honors Society: 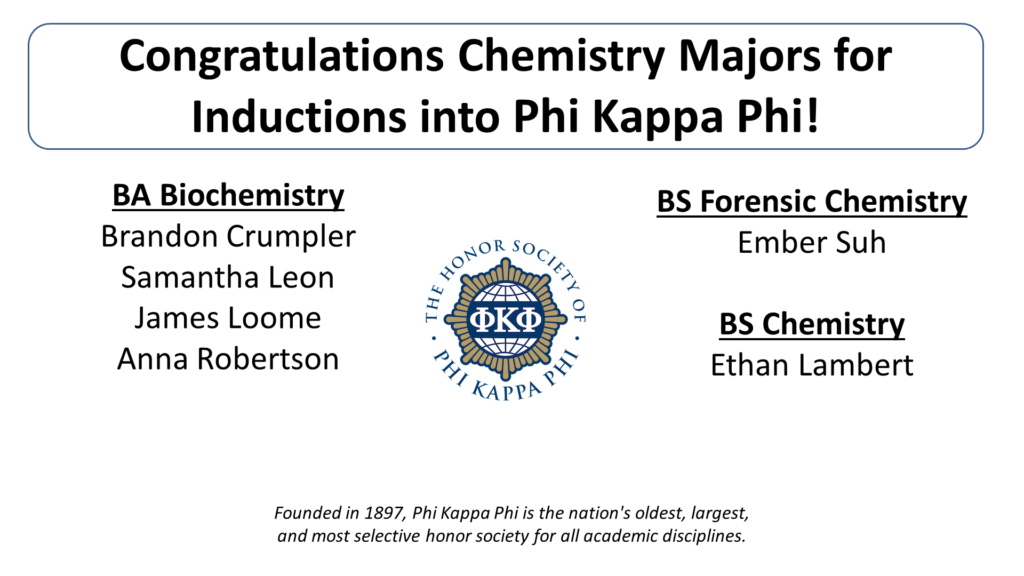