Prof. Daniell Mattern, a renowned organic synthetic chemist in the Department of Chemistry and Biochemistry, is the newest recipient of the Margaret McLean Coulter Professorship at the University of Mississippi.

Daniell Mattern is the fourth UM faculty member to be awarded the endowed position, which was established in 1983 through a bequest in the will of the late Victor Aldine Coulter, for whom Coulter Hall is named. Coulter served as dean of the College of Liberal Arts from 1936 to 1957 and was a professor of chemistry.

“I was stunned,” Mattern said after receiving the news from his department chair. “I thought perhaps he was joking, but he assured me he was not. The previous holders have been so impressive; it did not cross my mind that this was in the cards.”

The Coulter Professorship recognizes a professor in the department who has excelled in teaching and research. The award includes the honorific title “Margaret McLean Coulter Professor” and includes a yearly stipend that can be used as a salary supplement or for research support and travel.

Mattern was chosen for this distinction as a result of his outstanding achievements in research about organic electronic materials and his unparalleled success in teaching a difficult branch of chemistry to a myriad of UM students. Previous recipients include the late Charles A. Panetta, retired professor Jon F. Parcher and associate provost Maurice R. Eftink. 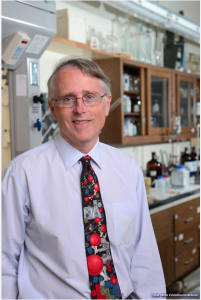 “It is rare to find anyone who has graduated from our university and pursued a career in the health professions, such as pharmacy, medicine or dentistry, who has not been touched in some way by Dr. Mattern,” said Charles Hussey, chair and professor of chemistry and biochemistry. “He is well known for his engaging teaching style in which he makes a game out of learning organic chemistry. Students quickly forget that they are studying a subject which had seemed so formidable to them in the beginning.”

Mattern joined the UM faculty in 1980, when Coulter Hall was just a few years old.

“Victor Coulter was alive at the time, although I never met him,” he said. “The position offered a good blend of teaching and research opportunities, and I have been able to keep engaged with both of those facets of being a professor for my 35 years here.”

“The Coulter Professorship is the first recognition I have received that speaks to the full spectrum of a professor’s responsibilities: research, teaching and service,” Mattern said.

The honoree has published extensively about the synthetic routes to organic molecular rectifiers, (such as electronic components that are composed of certain arrangements of organic chemical compounds instead the usual silicon-based electronic materials). Mattern’s research has been supported by the National Science Foundation.

“Making a particular molecule a tiny bit smaller, solely by putting deuteriums in place of its hydrogens, has to be among the most personally fulfilling among my research achievements,” Mattern said. “I’d been fascinated with this concept as a graduate student and saw a way to demonstrate it by modifying a molecule we were using in another study. So this little side project satisfied a longtime quest for me.”

Equally gratifying for Mattern was a service task he took upon himself when he was on the Undergraduate Council: a complete revision of the undergraduate catalog.

“It had been assembled piecemeal over the decades and had accumulated a great deal of conflicting, awkward and obsolete passages,” he said. “I found it hard to use as a council member, and I’m sure students found it difficult, too. It took a couple of years, but we got every section reworked and approved.”

When it comes to instruction, Mattern said probably the most fun he has in teaching organic chemistry is on the last day of class.

“We have a course review in the form of a quiz show,” he said. “Teams of students try to answer questions to expose the ‘hidden reaction’ so they can ‘name that product.’ I wear a tux, and we give away goofy prizes to the winners.”

Mattern received a bachelor’s degree from Kalamazoo College in Michigan and his master’s and doctoral degrees from Stanford University. He did postdoctoral research at Tufts University Medical School in Boston and the University of California at San Diego before joining UM as an assistant professor in 1980. Mattern teaches undergraduate and graduate courses in organic chemistry.

He is married to Elaine Gelbard, a dance teacher and arts educator. They have two adult daughters, Sierra and Jillian.

Mattern has been a cellist for 50 years and plays with the North Mississippi Symphony Orchestra. An author, he has written a few Ten-Minutes Plays that have been produced by Theatre Oxford. Mattern also enjoys hiking in mountains and riding his bike around campus.