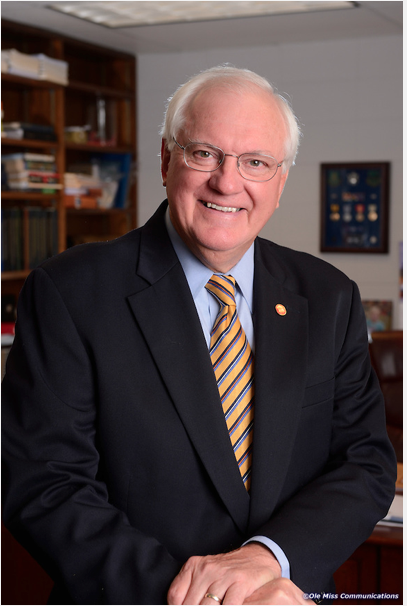 After 42 years, Dr. Charles L. Hussey, Associate Dean for Research & Graduate Education in the College of Liberal Arts and Distinguished Professor of Chemistry and Biochemistry, is retiring this December.  Hussey first came to the University of Mississippi in 1968 as an undergraduate student majoring in chemistry.  He received the department’s flagship  American Chemical Society (ACS) certified Bachelor of Science in Chemistry in 1971.  He chose to stay at UM and received his PhD in 1974.  After graduation he served on active duty in the USAF at the Frank J. Seiler Research Laboratory at the USAF Academy, where he was also an instructor in the Department of Chemistry. He received the Air Force Commendation Medal for his research work on the development of molten salt-based thermal batteries.  He then returned to the University and has taught courses in analytical chemistry and electrochemistry in the Department of Chemistry and Biochemistry at UM since 1978.  Dr. Hussey served as Chair of the Department of Chemistry and Biochemistry from 1997 until 2017 and then became the first  Associate Dean for Research and Graduate Education in the College of Liberal Arts.

Hussey’s research interests are directed at electrochemistry and spectroscopy in molten salts and ionic liquids. His experimental work includes the electro-deposition of metals and alloys, the electrochemistry of lanthanides and actinides as related to the nuclear fuel cycle, the physical and transport properties of molten salts and ionic liquids and the applications of ionic liquids as fluids for chemical engineering processes. He has authored/co-authored more than 160 journal articles and book chapters and is co-inventor on five patents. He co-authored a seminal journal article entitled “Dialkylimidazolium Melts: A New Class of Room Temperature Ionic Liquids for Electrochemistry, Spectroscopy and Synthesis,” which has garnered more than 2,000 citations. Hussey has been the P.I./co-P.I. on more than $8,000,000 in external grants. He has presented papers and given lectures on his work at international conferences and at universities in the U.S. and Europe. In 2014, his research about the electrochemistry of ionic liquids was recognized by the international Max Bredig Award for Molten Salt and Ionic Liquid Chemistry.

For more than 18 years, Dr. Hussey served as a technical editor for the Journal of The Electrochemical Society, the world’s top-ranked journal devoted to the science of electrochemistry. His national service includes the Board of Visitors Review Team for the Battery and Propulsion Directorate at the Wright Laboratory (now AFRL), the National Research Council Committee on Electrometallurgical Techniques for DOE Spent Fuel Treatment, the University of Chicago Review Committee for the Chemical Technology (CMT) Division of Argonne National Laboratory, and the Board of Visitors Review Team for the Chemical Sciences Division of the Army Research Office. He has also served as a consultant to the Lawrence Livermore National Laboratory.

Dr. Hussey was elected Fellow of The Electrochemical Society in 2007 and was designated as an Emeritus Member in 2017. He is a member of Phi Kappa Phi, Sigma Xi, and the Golden Key National Honor Society. In 2014, he received the Southeastern Conference Faculty Achievement Award and the R&D Magazine Top 100 Invention Award. At the University of Mississippi, he has been honored with the Distinguished Research and Creative Achievement Award, the Faculty Achievement Award, and the 25-Year Service Award. In 2018, he was recognized with the Lift Every Voice Award for diversity and inclusion during Black History Month.

Read more about Dr. Hussey in the UM News story.