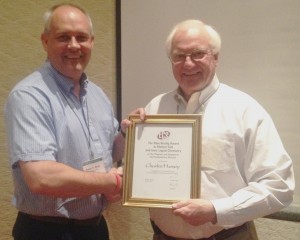 A University of Mississippi professor’s lifetime of successful research in molten salt and ionic liquid chemistry has brought him the ultimate international honor in his field.

Charles L. “Chuck” Hussey is the 14th recipient of the Electrochemical Society’s Max Bredig Award in Molten Salt and Ionic Liquid Chemistry. The UM chair and professor of chemistry and biochemistry was presented the award this month at the 226th annual ECS convention in Cancun, Mexico.

“This is the highest international recognition that is given to people working in my particular research area,” Hussey said. “The society held a special session in the molten salt symposium at the meeting in my honor and hosted an award dinner, where I was presented with the recognition. I was very surprised and pleased to receive this honor.”

Paul A. Kohl, the society’s president and the Hercules Inc./Thomas L. Gossage Chair and Regents Professor of Electrochemistry at Georgia Institute of Technology, said his colleague is most deserving of the honor.

“An intellectual leader in this unique field for more than 30 years, Professor Hussey has made significant contributions to both the fundamental understanding and applications of molten salts and ionic liquids,” Kohl said. “He is a model and inspiration for many of us.”

“The chemistry department has flourished under his leadership,” said Richard Forgette, professor of political science and interim dean of the College of Liberal Arts. “We are proud of his many accomplishments and grateful to have him as a colleague.”

The Bredig award is external validation of Hussey’s noteworthy accomplishments, Provost Morris Stocks said. “He is an outstanding faculty member and a distinguished scientist who strengthens our learning community.”

Bredig, for whom the award is named, was a pioneer in the study of phase equilibria, thermodynamic phenomena and transport properties of molten salts. A researcher at the Fritz Huber Institute in Berlin and the James Franck Institute in Gottingen, he conducted the first X-ray and neutron diffraction studies on molten salts while employed at Oak Ridge National Laboratories. The award was initiated in 1987 by the late Gleb Mamantov, professor and chair of chemistry at the University of Tennessee, with support from ARCO Metals and ALCOA. Mamantov was himself the fourth recipient of the award.

Hussey earned his bachelor’s and doctoral degrees in chemistry from UM in 1971 and 1974, respectively. From 1974 to ’78, he was a research chemist and active duty military officer at the Frank J. Seiler Research Laboratory (Air Force Systems Command) at the U.S. Air Force Academy.

Hussey joined the UM chemistry department as an assistant professor in 1978. Concurrently, he served as a member of the U.S. Air Force Reserve and was assigned to the Battery and Propulsion Directorate, Wright Laboratory, Air Force Materiel Command, retiring in 1994 as a lieutenant colonel. He was promoted to professor in 1987 and became department chair in 1997.

More than 25 students have earned advanced degrees in his laboratory, and many of them hold significant positions in industry or academia.  For more details see the official Ole Miss news story.