The awards, both of which are in their second year of existence, include medals and stipends of $1,000 and $2,000 respectively. They were presented May 12 during the college’s Commencement exercises. 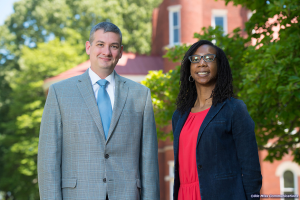 The Edmonds Award is presented annually to untenured, tenure-track professorial rank faculty members who are within six years of their initial academic appointment and who have demonstrated exemplary performance in research, scholarship and/or creative achievement. Recipients of the Award for Research, Scholarship and Creative Achievement have achieved scholarly recognition and influence well beyond the university.

“These award recipients are among the very best scholars at the University of Mississippi, and we celebrate their success,” said Charles Hussey, associate dean for research and graduate education and professor of chemistry and biochemistry who served as chair of the selection committee.

The first African-American female tenure track professor hired in the Department of Chemistry and Biochemistry, Watkins received a prestigious National Science Foundation CAREER Award for $499,593 for work she has completed at the university, her creative ideas for future research activities and her strong teaching credentials. Her most recent research endeavors received $95,000 in joint support from the United Negro College Fund and Merck.

Hammer, an associate professor of chemistry and biochemistry, has served as principal investigator on five grants from the National Science Foundation totaling more than $7 million. These include an NSF CAREER Award, a Research Experiences for Undergraduates Site and a major instrumentation award. He served the state’s National Science Foundation EPSCoR program as Track 1 senior personnel and program architect and Track 2 program director.

This year’s honorees are exceptional, and their work reflects the goals for which the awards were created, said Lee M. Cohen, dean of the College of Liberal Arts and professor of psychology.

“As a Carnegie R1 university, it is important that we publicly recognize and reward our most productive faculty for their sustained efforts in research, scholarship and creative achievement,” Cohen said. “I hope the recent establishment of these awards will help us to elevate our productivity moving forward.”