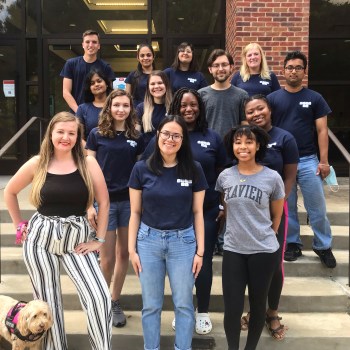 University of Mississippi chemistry professor Eden Tanner (front left) and her team of researchers are a diverse group, including one postdoctoral scholar, six graduate students and 18 undergraduates, who have majors ranging from chemistry and pharmacy to engineering.

A University of Mississippi Chemistry professor and her team of researchers are working on new ways to use red blood cells and platelets to transport chemotherapies and other medicines to specific areas of the body, which could greatly reduce patients’ side effects.

Eden Tanner, UM assistant professor of chemistry and biochemistry, has been awarded a Pharmaceutical Research and Manufacturers of America’s Research Starter Grant in Drug Delivery for $100,000 to help fund the work. The grant, which is given to one winner annually, is designed for tenure-track faculty who are in the earliest stages of their careers to advance their research in drug delivery.

“We are really excited about the potential that this technology offers,” Tanner said. “Currently, if you get lung cancer and surgery is not an option, basically you just get bathed in chemotherapy.

“It makes people very ill. It is not a very positive experience.”

The lab in Coulter Hall where she works contains vials of ionic liquids in varying viscosities, some of them looking like honey or maple syrup. Researchers are using different ones to determine which work best for different types of drugs.

She explains the concept of cellular hitchhiking using the example of someone being treated for lung cancer.

“If we could instead just target the lung, for instance, and not have it go everywhere, this means the side effect profile is much less severe and people aren’t as sick,” Tanner said. “Our technology could be used to hitch a ride on red blood cells, which then deliver our cargo to the lungs, as opposed to everywhere else in the body.” 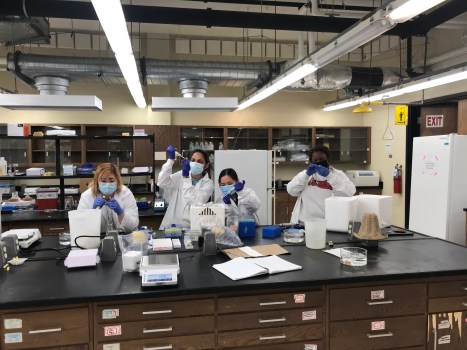 Student researchers work in Eden Tanner’s lab in Coulter Hall. Tanner and her team are studying new ways to use red blood cells and platelets to transport chemotherapies and other medicines to specific areas of the body.

Tanner said she will use the award to continue training the next generation of drug delivery scientists. The funding will help procure technologies for the experiments and to hire assistants for the work.

She is pleased with not only the strength of the group assembled, but also that they come from many different backgrounds. All bring different experiences, perspectives and special skills to the table, she said. Among them are one postdoctoral scholar, six Ole Miss graduate students and 18 undergraduates, who have majors ranging from chemistry and pharmacy to engineering.

Some 65% of the group are women or nonbinary people, and 40% are people of color, Tanner said.

“I have a large team of excellent students,” Tanner said. “It is a very collaborative group effort. This is not a ‘lone genius’ situation.

“We bring people together from chemistry and pharmacy and other areas because we need their expertise to help us advance this along.”

Karen Wong, a senior biochemistry and Chinese major from Gulfport, said her work focuses on targeting platelets within the blood. Working on the project has taught her the importance of such research.

It’s an exciting process, too, she said.

“Engaging in research has allowed me to gain an understanding of how important it is to the medical world because there are so many limitations and risks associated with medical procedures as well as drugs,” Wong said.

“In addition, it is a very meticulous and slow process to work toward advancing science, but one must be patient and never give up on it because you never know when you’ll have a scientific breakthrough!”

She’s also learning the value of teamwork in the lab.

“Each experiment requires a lot of preparation, and I learned the importance of teamwork because it makes carrying out large experiments more efficient because each one of us was responsible for synthesizing specific nanoparticles, splitting the tasks, and putting our work together, in the end, made everything go much smoother,” Wong said.

Joh’nis Randall, a junior pharmaceutical sciences major from Jackson, said the experience has been “nothing short of amazing.” The work has taught her much more than just the necessary parts she needed to learn.

Randall said she has grown during the process and appreciates Tanner and the rest of the team for pushing her to be her best.

“From the early mornings and late nights in the lab, preparing for the day of the bloodwork was always a tedious task,” she said. “Doing this project has gotten me out of my shell and has expanded my knowledge on different aspects of physical chemistry.

Randall wants to make a difference.

“I hope that we all make a breakthrough in scientific discovery that would one day change how medicine works,” Randall said.

The way the lab is structured creates many chances for collaboration, a skill important in any career, said Meghan Gorniak, a senior chemistry major from Glen Carbon, Illinois.

“This lab has pushed me to think critically and to understand the application of so many scientific topics,” Gorniak said. “I hope that my work on white blood cells can help further medical science discoveries.

“I cannot thank Dr. Tanner enough for being my mentor and teaching me how cool research can be.”