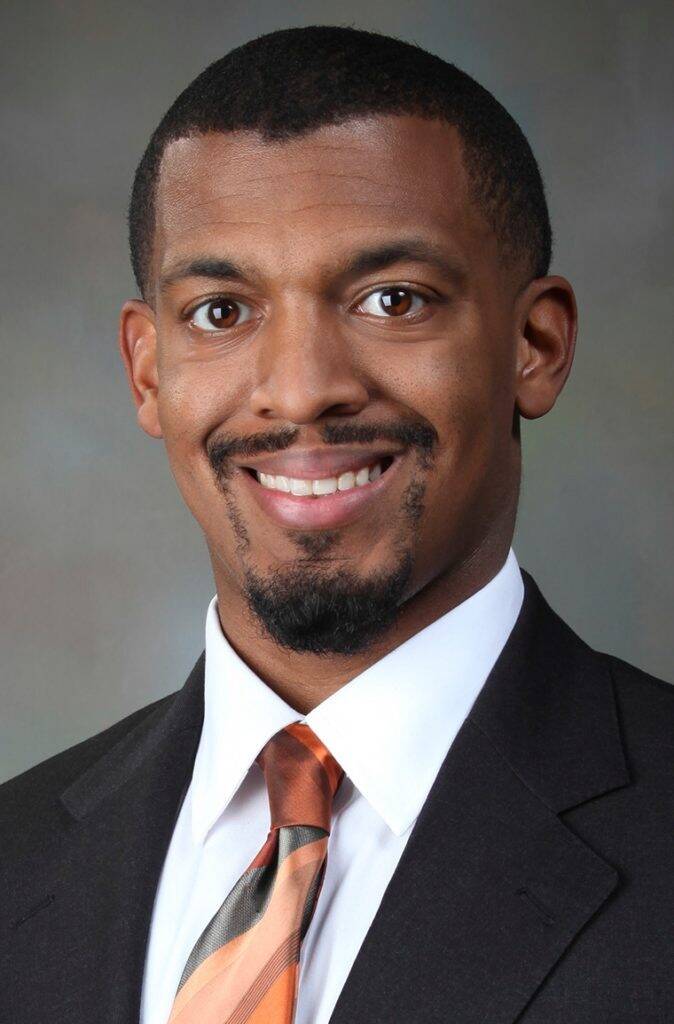 Dr. Larico Treadwell  was awarded a 2021 Black Engineer of the Year Award in the category of Most Promising Scientist.  BEYA is a program of the national Career Communications Group, an advocate for corporate diversity, and is part of its STEM achievement program. The award recognizes the nation’s best and brightest engineers, scientists and technology experts.

Early on in Dr. Treadwell’s life, he exhibited a keen intellect with a particular aptitude for science and engineering.  He enjoyed taking things apart to see how they worked and experimenting with various foods and household chemicals to see what color/concoction resulted. Everyone, including the immediate family, recognized LaRico’s inquisitive nature and destined him to be a leader and innovator.

He graduated from South Panola High School with honors in 2006 and decided to attend UM as an Ole Miss First Scholar recipient.  Dr. Treadwell was initially interested in pursuing medicine. However, he became a Louis Stokes Mississippi Alliance for Minority (LSMAP-IMAGE), Ronald E. McNair, and Alliance for Graduate Education in Mississippi (AGEM) scholar, which introduced him to laboratory research. He worked in the laboratory of Jason Ritchie, Associate Professor of Chemistry, with a focus on hydrogen powered fuel cells. This experience solidified Dr. Treadwell’s commitment to pursing a BS in Chemistry degree and going on to graduate school. He became one of the first African Americans to receive a BS in Chemistry at UM in 2010, as well as the first STEM bachelor’s degree of his family.

After graduation, Dr. Treadwell enrolled in Louisiana State University in the PhD Chemistry program as a Board of Regents Fellow. He was mentored by Prof. Julia Chan in Solid State Chemistry. Under Dr. Chan’s tutelage, he published multiple peer reviewed articles by developing impressive skills in solid state chemistry synthesis and with a focus on understanding the physical and chemical behavior of chemical moieties.

While attending LSU, Dr. Treadwell was President of the local National Organization of Black Chemist and Chemical Engineer (NOBCChE) Chapter and Chemistry Graduate School Council, amongst his numerous contributions and participation in local communities through outreach events. In 2015, Dr. Treadwell received his PhD and subsequently accepted a Postdoctoral Fellow position at Sandia National Laboratories.

As a Postdoctoral Fellow, Dr. Treadwell studied under Dr. Timothy J. Boyle to master inorganic synthesis of small molecules, fabrication of nanomaterials, and other material processing techniques for a variety of application including thermoelectric, circuitry, capacitors, and flywheels. During his tenure as a postdoc, Dr. Treadwell published numerous peer-reviewed journals and filed several patents.

In 2017, Dr. Treadwell accepted a position as a R&D Chemist as Sandia National Laboratories. He was awarded an Early Career Laboratory Directed Research and Development (LDRD) award to investigate magneto-inks with an emphasis on increasing materials reliability in engineered devices. His work covers the spectrum from basic materials discovery and characterization through applied materials reliability and device fabrication for a wide range of application such as radiation, ultra-high temperature systems, non-linear optics, and thermoelectrics. Dr. Treadwell’s research advances science frontiers in chemistry, engineering, materials and component reliability. Additionally, he serves in multiple programmatic roles contributing across the spectrum of Nuclear Deterrence Programs. He serves in leadership roles for materials analysis and compatibility for a wide spectrum of these critical national security programs.

Along with his excellent technical work, Dr. Treadwell gives back to the community. He worked with a number of companies through the New Mexico Small Business Assistance Program. He leads CSI Dognapping, a highly recognized community outreach program that provides science enrichment for nearly 500 fourth graders every year. Dr. Treadwell was awarded a Sandia Employee Recognition Award for Diversity for championing diversity programs across Sandia, including programs students from Historically Black Colleges and Universities (HBCU) into STEM.

Overall, Dr. Treadwell’s technical success has offered him an opportunity to reach beyond research to impact the development of the next generation of scientists and engineers with a focus on maximizing minority representation in STEM careers.