Chemistry professor Jared Delcamp has been honored as an inaugural recipient of a New Scholar Award in the university’s College of Liberal Arts.

“The College of Liberal Arts continues to recruit some of the very best young faculty in the nation,” said Charles L. Hussey, associate dean for research and graduate education and professor of chemistry. “These faculty members represent the ‘best of the best’ in the college and will no doubt prove to be academic leaders in their discipline.” 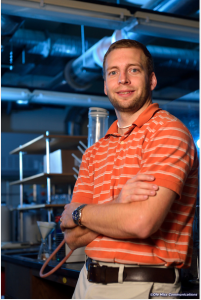 The New Scholar Award will be presented annually to untenured, tenure-track faculty members in the College of Liberal Arts who are within six years of their initial tenure-track academic appointment and who have demonstrated exemplary performance in research, scholarship and/or creative achievement. Depending on the quality of the pool of nominees, up to four awards will be available, with one each chosen from the areas of natural sciences and mathematics, social sciences, humanities, and fine and performing arts.

Individuals may receive the award only once, but recipients will retain their eligibility for the College of Liberal Arts Award for Research, Scholarship and Creative Achievement, which is normally awarded to post-tenure, senior faculty. “New scholars must be nominated by the department chair and/or tenured professorial rank colleagues in cooperation with the chair,” Hussey said. “Nominations will remain active for two years. A faculty committee chosen by the dean of the College of Liberal Arts or his designee will select the award recipients.”

Delcamp said he was so focused on his field’s research that he really hadn’t considered anyone outside of it taking notice of progress being made. “To be acknowledged by people outside my own small research world was very fulfilling,” he said. “To be given an award like this certainly has instilled a sense of pride in the work my group has done. It was great to see people outside my field taking note of how hard we have been working.”

Delcamp’s research focuses on dye-sensitized solar cells. These solar cell materials are made from very robust, cost-effective, nonhazardous materials and can be mass produced at a fraction of the cost of solar cells commonly seen on rooftops. “My group focuses on one specific component of these solar cells that is known to be the performance-limiting material,” Delcamp said. “We are using synthetic organic chemistry to offer new materials, which can be competitive in terms of performance to traditional solar cells while maintaining the tremendous cost advantage. So far, my team owns a number of records in this field, and we look forward to breaking them soon.”

For more information about the College of Liberal Arts, go to http://libarts.olemiss.edu.

For more information about this year’s recipients, see https://news.olemiss.edu/four-um-faculty-members-named-liberal-arts-new-scholars.