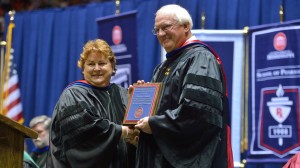 Whether or not it’s true that good things comes in threes, that’s certainly been the case for Charles L. Hussey, who received the University of Mississippi’s 2015 Distinguished Research and Creative Achievement Award on Saturday (May 9).

The UM chair and professor of chemistry and biochemistry was presented the prestigious honor, which includes $7,500 and a personal plaque, during the university’s annual Commencement ceremonies in Tad Smith Coliseum. Hussey also received the Electrochemical Society’s Max Bredig Award in Molten Salt and Ionic Liquid Chemistry last October and the Southeastern Conference’s Faculty Achievement Award in April.

“I think this is the most important of the three because it recognizes a lifetime of scientific achievement at UM resulting from hard work, sacrifice, as well as a bit of good luck,” Hussey said upon learning of his third accolade this academic year. “There are many deserving researchers/scholars on this campus, and I was very fortunate and humbled to be chosen from this pool of very accomplished people.

“I have been very privileged to work with a number of outstanding colleagues across the U.S. and Europe, as well as great doctoral and postdoctoral students. And most importantly, I have a very tolerant family who put up with my extra hours at work, many business trips and military reserve duty, too.

Alice Clark, UM vice chancellor for research and sponsored programs, said Hussey is most deserving of the award.

“In Dr. Hussy’s prolific career, he has produced more than 150 peer-reviewed publications, including several that have been cited more than 100 times and a seminal article leading to the birth of ionic liquids that has been cited more than 1,500 times,” Clark said. “He has an impressive track record of extramural competitive funding and his lab was recognized recently by R&D Magazine for developing a novel aluminum plating system that was considered to be one of the 100 most technologically significant products in 2014.

“His many accomplishments demonstrate his leadership in the field, his scientific creativity and his instinct for innovative thinking.”

Hussey, who holds a doctorate in chemistry from UM, joined the faculty in 1978 after serving a four-year active duty term as a military scientist at the U.S. Air Force Academy’s Frank J. Seiler Research Lab. For more than 30 years, he has researched the electrochemistry and transport properties of ionic liquids and molten salts, an outgrowth of the work he began at the Seiler Lab.

He has authored or co-authored more than 140 refereed journal articles, book chapters, patents and government technical reports. His work has been supported by the National Science Foundation, Air Force Office of Scientific Research, Alcoa, U.S. Department of Energy and U.S. Department of Defense. He is technical editor of the Electrochemical Society journals.

“Dr. Hussey’s research record is truly impressive, and he is a model for other faculty in the college,” said Rich Forgette, interim dean of the College of Liberal Arts and professor of political science. “Chuck is a leader in his field of electrochemistry, and our chemistry department has flourished under his leadership.”

Hussey said he already has plans for how he will spend funds that come with his award.

“My three grandchildren, Olivia, Charles and Maddie, have requested another trip to Disney World,” he said. “This trip should take care of the stipend money.”

Created in 2008, the annual honor recognizes a faculty member who has shown outstanding accomplishment in research, scholarship and/or creative activity. Much like Hall of Fame inductions, recipients can receive the honor only once. Nominees must be an associate or full professor (including research associate professors or research professors who are not tenure-track faculty) and must have been continuously employed full-time by the university for at least five years.