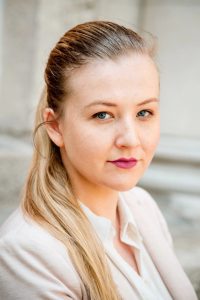 Dr. Eden Tanner will join the Department in July, 2020

Dr. Eden Tanner joined the University of Mississippi Department of Chemistry & Biochemistry on July 1st.  Dr. Tanner received her Bachelor of Advanced Science from The University of New South Wales, Australia in 2012 and he Doctor of Philosophy in Physical and Theoretical Chemistry from the University of Oxford, United Kingdom in 2016 under the direction of Prof. Richard G. Compton.  She then served as a Postdoctoral Research Fellow at Harvard University working with Prof. Samir Mitragotri in the School of Engineering and Applied Science before joining the faculty at UM.  Her group will use a physical chemistry toolkit to solve biomedical and bioengineering problems, particularly using ionic liquids and nanomaterials.

The Tanner lab will seek to solve outstanding bioengineering research questions using a chemistry framework, where an understanding of the molecular interactions within the delivery system allows the development of predictive frameworks and task-specific solvent design.  Ionic liquids, consisting of a bulky, asymmetric cation and an anion, have attracted significant interest in a broad range of applications, including catalysis and energy applications, due to their favorable properties, including non-volatility, recyclability, and their inherent tuneability whereby the anion and cation can be altered to change the physicochemical properties of the material.  By synthesizing the ionic liquids with biocompatible or bioinspired starting materials, they can be employed in biological contexts. Because changing the structure of the ionic components results in changes to their their biologically relevant properties, including interactions with bio-interfaces, biomolecules and pharmaceutical ingredients, they can be tuned to solve a variety of problems.  Nanoparticles have been touted as ideal drug delivery systems due to their ability to deliver drugs in a more effective, safe, and specific way compared to traditional therapeutics, particularly in the context of administering chemotherapy, such as doxorubicin, to treat cancer. However, the vast majority of nanoparticle technologies do not progress clinically as they face a number of currently insurmountable challenges, which result in <5 % arriving to the intended destination.