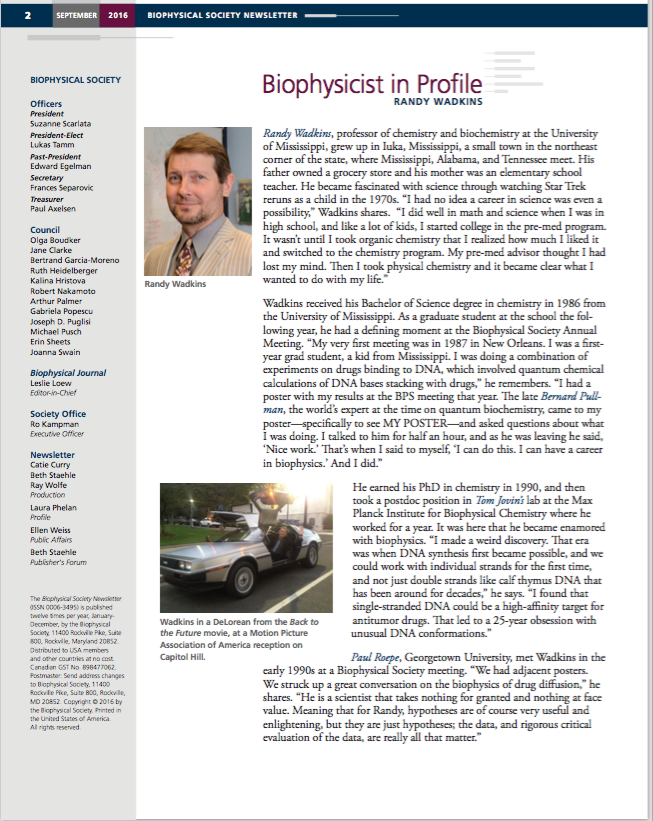 How did you get started in science in general and biophysics in particular?
I grew up in a small town in Mississippi. I had no idea that that a career in science was even a possibility. I did well in math and science when I was in high school, and like a lot of kids, I started college in the pre-med program. It wasn’t until I took organic chemistry that I realized how much I liked it and switched to the B.S. in chemistry program. My pre-med advisor thought I had lost my mind. Then I took physical chemistry and it became clear what I wanted to do with my life. The biophysics began in graduate school.

Are (were) other members of your family involved in science? If not, what sort of work were your parent(s) or guardian(s) involved in while you were growing up?
I had a very blue-collar life growing up. The closest thing to science was when my dad worked briefly for the county health department and sampled well water to bring back for contaminant testing. He later owned and managed a grocery store. My mom was an elementary school teacher. My fascination with science really began with watching Star Trek reruns in the 1970s.

Where did you grow up?
Iuka, Mississippi; in the northeast corner, where Mississippi, Alabama, and Tennessee meet. It was called the “tri-state area.”

When you were a child, what career did you hope you would have as an adult?
I thought I would be a medical doctor because that’s all I knew about.

What schools have you attended/are you attending? What degrees do you hold, and when did you earn them?
I attended the University of Mississippi and received a B.S. in chemistry in 1986. I wasn’t quite sure what I was doing then, and ended up staying on for graduate school as well. I received my Ph.D. in chemistry in 1990.

Please describe any postdoctoral work you have done.
The post-doctoral era was one of the most interesting and stressful periods of my life. The Ph.D. glut that everyone complains about now is nothing new, so I ended up doing a lot of post-doc jobs. For my first one, I spent a year in Germany at the Max Planck Institute for Biophysical Chemistry. That’s where I really got the biophysics bug. Later I was at St. Jude Children’s Research Hospital in Memphis, followed by the Naval Research Laboratory in DC. I nearly gave up on science as a career, but caught a break.

Please describe your area of specialization/research interests in ten words or less.
I have become fascinated with DNA as a nanomaterial.

Provide more detail about your area of specialization. Who or what got you started in this area?
When I was at the Max Planck Institute in Tom Jovin’s lab, I made a weird discovery. That was when DNA synthesis first became possible, and we could work with individual strands, not just double strands like calf thymus DNA that had been around for decades. I found that single stranded DNA could be a high-affinity target for antitumor drugs. That led to a 25-year obsession with unusual DNA conformations.

What positions, if any, have you held between postdoc and current position?
My first non-postdoctoral position was at the San Antonio Cancer Institute in Texas. From there, I was hired as an Assistant Professor of Oncology at the Johns Hopkins School of Medicine in Baltimore.

What is your current position? Please describe any current projects or research.
I am Professor of Chemistry and Biochemistry at the University of Mississippi. I am in the last year of a NCI R15 grant to study unusual DNA structures as drug targets. My lab just moved into the National Center for Natural Products Research on campus. My research is at the intersection of small molecules, natural products, DNA, and proteins that bind DNA.

What has been the biggest challenge in your career? How did you face it?
The same challenge everyone in the business faces: keeping my lab funded. I’ve been very fortunate to have had funding from one source or another for 18 straight years. It hasn’t always been enough to do everything we wanted to do, but it kept the doors open and the students busy. You face it by continuing to try to get funding. If you have a basic science lab, nobody comes to you. You have to go to them and sell your idea.

What is your favorite thing about biophysics?
That no matter how complex a problem might be, the underlying physics is fairly simple. I love trying to piece together the steps from the simple to the complex.

What is the most rewarding aspect of your work?
That has evolved over the years. It used to be about the excitement of a new discovery, and there’s certainly still that. But, it is also very rewarding to be training the next generation of scientists and to see them be successful after they leave my lab.

What is the most challenging aspect of your work?
Finding time to be in the lab! Between teaching classes, grading, sitting on committees, writing reports, writing grant proposals, and going to meetings, there’s not a lot of time left to be in the lab, which is where I most want to be.

You have spent the last year as the BPS Congressional Fellow. How has this differed from your work at the university?
This has really opened my eyes as to how the government really works. It’s much different from the civics classes I took in elementary school (do they even teach those anymore?). I handle the healthcare portfolio for the Congressman, and that is an incredibly complex issue, but unlike biophysics, the underlying principles are not simple. Nobel Laureate Michael Levitt was here for Biophysics Hill Day, and I told him that if he thought quantum mechanics was difficult, try Medicare billing codes.

What will you miss the most about the experience when you are back at the university?
What are you most looking forward to about your return?
I’m going to miss the astonishing learning experience you get on the Hill. Not only do Nobel Laureates drop by to give briefings, so do directors of programs at NIH, NSF, NASA, etc.; advocacy organizations for every imaginable cause; celebrities of every magnitude; political leaders of every stripe; business leaders of every area of commerce; military leaders; they all come to the Hill to inform Congress what is happening in the world. It is a fire hose of knowledge, and I will miss trying to drink in every drop.

I’m most looking forward to returning to the university and trying to put this experience to good use in fostering government outreach efforts.

I am also playing Powerball every week on the slim odds that I could stay in the Congressman’s office another year.

What are your future plans for your career and/or research? What do you hope to contribute to biophysics?
I plan to continue looking into uses of DNA as a nanomaterial, but everyone working in the field knows that DNA is not cost-effective for mass production. I look forward to figuring out how to merge DNA’s ease of use with a material that is more conducive to use in scale-up applications.

Name someone you admire (you may or may not know them) and explain why.
Rush Holt, CEO of AAAS. Faculty member at Swarthmore College, Congressional Fellow, faculty at Princeton, Congressman from NJ for 16 years, now AAAS CEO. Also, the nicest guy you’ll ever meet. He is the gold standard for anyone interested in science policy.

What do you do when you’re not doing science/working?
Exploring tropical islands. Bora Bora lives up to its reputation.

What do you find special or useful about the Biophysical Society (programs, committee events, meetings, journal) and why?
The BPS annual meeting is one of my favorite things on earth (maybe not the Kansas City one). So many brilliant people with such diverse backgrounds and areas of research. I’ve been going since 1987. Another fire hose of knowledge.

How has being a member of the Society supported your research/career? (i.e. connections you have made, etc.)
My very first meeting was in 1987 in New Orleans. I was a first-year grad student, a kid from Mississippi. I was doing a combination of experiments on drugs binding to DNA, which involved quantum chemical calculations of DNA bases stacking with drugs. I had a poster with my results at the BPS meeting that year. The late Bernard Pullman, the world’s expert at the time on quantum biochemistry, came to my poster—specifically to see MY POSTER—and asked questions about what I was doing. I talked to him for half an hour, and as he was leaving he said “nice work.” That’s when I said to myself “I can do this. I can have a career in biophysics.” And I did.

What advice would you give young people just starting their careers in biophysics?
Hang in there. It’s a bumpy career. Even now, I get frustrated some days and throw my hands up. But 30 years from now, you’ll look back to your first experiments in grad school and think “I made the right decision to do this.” And what I’ve discovered from being a Congressional Fellow for a year is that not only will your training get you ready for a career in biophysics, it will get you ready for everything.